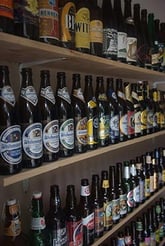 There is no denying that the Craft Beer Industry is growing – and rapidly at that. Currently in 2015 there are over 4,000 active breweries open within the United States, which is the most we have seen since pre-Prohibition. More specifically, craft breweries make up over 85% of that number.

As the market and industry expands, it should come to no surprise that individual breweries will begin to feel the positive effects. As you begin to produce more craft beer, you may soon find that your current production equipment is no longer fulfilling your needs.

Now that you are looking to upgrade your equipment- what better place to start than with what your consumers see the most – your labels!

Materials: What Kind Of Label Are You Going To Use?

The type of label that you use is an important component in your marketing strategy.

In a craft beer study conducted by Package InSight, a group of 190 subjects were given special glasses that could track and record their eye movements. The subjects entered a realistic set design to look like a grocery store or a local beer distributor. One bottle on the shelf featured label in either: paper, matte film, white gloss film, metalized film, wood veneer, and clear printed. Each bottle was viewed by 30 participants before being switched out. Each bottle was also numbered so that the subjects could record which beer they had selected for purchase.

The study shows that the label you choose, as well as design, clearly influences buyer decisions.

LabelPack Automation is experienced in creating labels and designing automated application solutions for craft breweries. We can create your labels on:

LabelPack Automation offers free beer bottle label templates that can be downloaded today so you can get started designing your own craft beer label.

If you need a labeling solution for your craft beer, please contact us today to speak with a sales representative!

Laurie Luther is a sales representative at LabelPack Automation who helps her customers find the most efficient solutions for their packaging automation requirements.

LabelPack Automation specializes in providing our customers with the most efficient, highest quality, turnkey automated systems for labeling, printing, case sealing, case forming, and conveying. LabelPack also provides fulfillment, forms management, and commercial printing services on demand. You can be assured that LabelPack will provide you with the best solutions, the highest-quality products, and the greatest customer service experience you can imagine. Let us create a solution for you today, so you can have a more productive tomorrow.